GOP members should be more than rabble-rousers

In order to have our voices heard, there is a difference between energizing citizens to get involved and inciting mobs to riot. Obama and his team did the former during this past presidential campaign. GOP members, to their shame, are doing the latter at health care reform town hall meetings. Even worse, they're relishing their actions.

Shame on GOP members for cheering and applauding Congressman Todd Akin of Missouri when he said that, "Different people from Washington, D.C. have come back to their districts and had town hall meetings and they almost got lynched." [from the transcript of the Rachel Maddow show on 8/6/09]. Does this Republican congressman and his audience understand what it is they're saying and applauding? How can Republicans be for disrupting the democratic process of a town hall meeting? Senator John McCain, to his credit, has come out against this type of behavior. 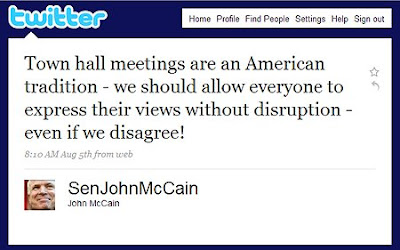 Rachel Maddow said on her August 6th show that, "Public figures have two options when political circumstances reach a point that's somewhere between extreme rhetoric and physical violence. You can condone the threats and then risk being seen as complicit to whatever comes next, or you can step up and be an adult, try to do something to restore civility."

My hope is that Republicans will do just that. That they'll energize GOP members not just to be active participants in the national health care reform conversation but to encourage them to do it constructively. We are better than what's being shown of us on national TV these days. We can and should be coherent in our ideas, our questions, our concerns.

Perhaps the problem lies in the reality that everyday Republicans are not necessarily the ones showing up and disrupting the town hall meetings. In the following clip, Rachel Maddow talks with Chris Hayes, of The Nation, and they comment on the disruptive behavior being shown by Republicans at these meetings. As the clips log-line states, in this clip you'll see Maddow reviewing the history of fake conservative protests.


According to this clip, the current rabble-rousers do not represent the best and highest the Republican party has to offer. It might be good for everyday Republicans to join the national conversation and bring their thoughts, ideas, questions, and concerns to the meetings, rather than allow counter-productive self-serving parties to send their hand-picked representatives to speak on their behalf.

Categories: In the News