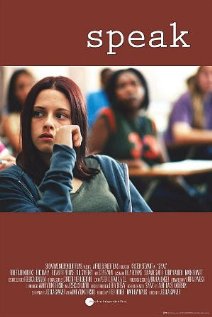 I just finished watching the movie, SPEAK, based on author Laurie Halse Anderson's book by the same title. In the story, a young girl has just graduated from junior high, next year she'll be in high school, so she's quite young.
*** SPOILER ALERT ***
She goes to what appears to be an end of school year party. The party is wild and fun and full kids and there's dancing, partying, alcohol. And this really cute guy takes an interest in Melinda, the main character, and she's flatered that someone like him is paying attention to her. Next thing you know, he rapes her.

You then watch Melinda walking around a mob scene, the party scene, in shock and disoriented. Not knowing what to do about what just happened to her, she dials 911. The cops come, some students get arrested, AND Melinda looses all her friends over that incident because she'd called the cops and stopped the party. Melinda doesn't tell anyone what happened to her, the reason she instinctively had dialed 911. It was her anguished call for help for what had happened. She ends up withdrawing into herself and when high school starts her old friends avoid her, call her names and she becomes the girl to stomp on so her freshman year is hell on wheels and the more kids abuse and insult her the less she speaks, ergo the title of the book.

I can now see why SPEAK

created such a buzz when it came out, has won awards and received great reviews. My heart broke watching the movie... to see the anguish a young girl goes through when hurting so badly on the inside and not able to speak about it to anyone. My heart went out to parents who see their daughters go silent on them or their sons go silent on them. My advice to parents... don't ignore it when your children go silent, i.e., don't leave them alone in their despair... even if they don't want to talk, or are not able to talk about their pain, let them know you're hearing their silent screams. Be there for them, praying as hard as you can, that eventually they'll be able to speak to you about it.

This story has a good ending. I've not given away anything that you don't find out in the first chapter of the book. How Melinda works it out, and the things and people that help and empower her to work it out, is what the story is about. Great movie... must be an even greater book.

I'd love to hear from anyone who's read the book or watched the movie. Did you like it? What are your thoughts?